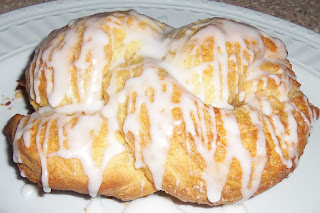 This week was the last week for the Farmers Market in my area.  It is kind of a sad moment, because I have been going to this particular market since 2008 and have not missed very many Tuesday afternoons.  I knew the names of the people we bought from and they knew us.  We always saw the same people.  We knew the honey lady, the milk lady, the bread lady, the soap lady, and the produce lady.  I would consider them my friends.  And this past Tuesday was the last one before we move, so we all went to say “good-bye.”

While we were there, we bought a couple of sweet bread braids.  One was cinnamon and sugar and the other was cream cheese.  They were so good!  And it got me thinking…  Man, I sure am going to miss this.  As soon as we got home, I set out to learn how to make my own.

Now, I know how to make bread.  I don’t do it very often, although I would love to.  But time and energy right now…  plus space…  is an issue.  However, this was a serious mission.  I am just not willing to give up those yummy sweet braids just because we are moving.

Then I figured it out.  I looked up a recipe and I will post that here.  You just have to try and make this sometime!  You will not be disappointed!

This really can be changed to meet any need or goal you have.  I chose to braid the bread dough, then spread a butter/cinnamon/sugar glaze over the dough as I was braiding it.  Then I added a simple white icing after it was baked. 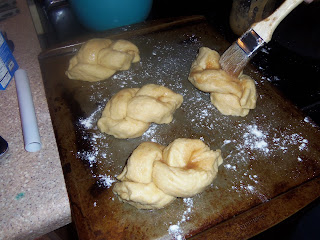 In a small sauce pan on low heat, add the milk, butter, and sugar.  Mix until dissolved.  Once everything is dissolved, add the yeast but ONLY after the mixture’s temperature is less than 115 degrees.  I did mine at about 100 degrees.  THEN add the yeast.  If you put it in while it is too hot, it will kill the yeast.

Set the yeast mixture to the side and let sit for about ten minutes.  It will start to bubble is the yeast is active.

In a mixing bowl, add all other ingredients.  Mix on low speed until even.  Then add the yeast mixture and mix again.  Watch while it is mixing.  As soon as all the flour mixture is sticking and the dough becomes one big clump, slide the dough off the hook, and place it onto a floured surface.  Knead just for a few minutes.

Now you need to make the cinnamon-sugar glaze.  Melt the butter.  Add the cinnamon and sugar and mix together.

To get it braided, cut the dough into four equal parts.  Take each part and cut it into three equal parts, then put the ends of the three pieces together and make sure they are secured to one another.  Braid the bread.  While braiding the bread, with a pastry brush, brush on the cinnamon-sugar glaze.  Once braided, secure the ends again.  Make sure they are nice and squished together.  Bread doesn’t like to stick very well.  Do this with all four pieces of the main dough.  If there is any glaze left, just brush it on thick on any the bread braids.

Let sit until the bread has doubled in size.  This should take only about 20 minutes or so.  Just watch it to see what it does.  If it does not rise, then the yeast was killed.  You can still bake it, but it will be very dense.

Bake at 375 degrees for about 20 minutes or until golden.

Make the icing.  Just add the ingredients into the mixer and beat until smooth.  Drizzle over the top of the bread.

You are so done!  And I promise, you will not regret making these! Don't let the fact that you are making bread intimidate you.  This is really easy.

Get a little creative and try something new.  Add fruit inside the braids, or cream cheese, or use whole wheat for part of the flour instead of white.  Try it out!  Then let me know what you made and how it turned out!

Posted by Rebecca Whiting at 13:52