Lessons from a Homesteader and an Herb Garden Plan

Today we did a lot of work.  Well, Keith (my husband) did a lot of work.  I did a lot of managing and complaining.  You know, I realized very early on, that even a backyard farm was A LOT of work.  We don’t have much space.  Everything we do is strictly limited to a backyard space.  I like to think of it as a farm (although the definition might vary for people) because this is the way I see it…  We grow food, we have the opportunity for fresh milk, eggs, and meat…  so in my mind, that makes us a farm. Right?  Everybody nod your head in unison.  Thanks.  I have learned a lot of lessons on a small space that someday I hope to take to a large space.

Anyways, today I was sick.  I came down with a fever yesterday and spent the majority of the afternoon in bed.  This morning I still felt like borderline poo, however…  we had already lined up a big project to start on this weekend, and I was working on a timeline.  Ever had one of those moments?  So, I say I was complaining, but Keith says he doesn’t really remember complaining.  Maybe he has learned to tune it out.  I was sick, so I am totally allowed to complain maybe a teensy weensy little bit.

My oldest daughter caught the homesteading bug right alongside Keith and I.  I think all the kids have it, but I think you have to be a certain age before you can get an official diagnosis.  The only cure that I have found for the homesteading bug is more cowbell.  And cowbells look really cute on goats I think.  Small ones, of course.  However, the treatment we decided on for my oldest daughter was actually an herb garden.  Not just any herb garden (because even though we have little space, our plans are always huge), but a raised herb garden....  with style.  Because style is important.  It makes plants grow better.  What?  You didn't know that?

Homesteading/ farming in an urban environment brings with ALL kinds of challenges, because in a small space like ours, you can’t just look at a spot and say “well, that isn’t going to work for me , so let’s find another place that will work” because there aren’t options.  There is either grit and determination or defeat.  Initially these were several problems that we faced (and overcame)…

Our backyard had no good sunny spot for gardening.  It’s a large backyard…  but it got no sun.  Solution?  We cut down A LOT of trees.  There were two HUGE loblolly pine trees that were each twelve feet in circumference at the base that were taken out.  On top of that, we took out at least 20 smaller trees, and a giant overgrown shrub.  Ta-da!  We now have sunshine!  We still have a TON of trees in our backyard.  Two mimosas, three dogwoods, two more massive pine trees, and an entire back fence of something I have yet to identify.  And don’t worry all you fellow tree huggers!  I planted enough to make up for what I replaced.  Just in more strategically placed spots that didn’t block the sun.

Our current obstacle is something that we can absolutely under no circumstance overcome through destruction and uprooting.  It’s this giant hedge in my neighbor’s yard, but so close to the fence line that a great deal of it is actually on our side of the fence.  Whoever planted this monster was not thinking ahead, because they planted it so close to the fence all the way down the side of their house that there is no way for them to maintain it.  Plus it is overgrown with honeysuckle.  I love honeysuckle, but if you don’t watch out, it will choke out everything around it.  Now, the solution to this predicament was a little tricky, because we made a small bed for herbs last spring and they didn’t actually do very well.  I know now that it was because of the hedge in our neighbor’s yard.  When two plants compete for the same nutrients in the soil, the much bigger hedge is always going to win over the little plants of sage and oregano…  and maybe some dill and peppermint.  Our solution?

We pulled up the old herb bed completely and started from scratch with a new design.  The bed got bigger, but to overcome the nutrient battle, we made the beds totally raised so that there is no competition anymore.  The beds are now two feet high, and 4 by 8 feet in size.  I did say beds, so we expanded it from one bed to two with a two foot wide pathway in between.  Each of them will be totally separate from the ground, although still sitting on the ground.  We pulled up all the sod that was going to be under the new beds and moved them to another area in the yard that needed a little extra grass.  Then, on the soil we placed landscaping fabric two to three layers thick.  The beds were placed on top of the fabric after they were put together (okay, as of right now only one is totally finished.  I was a doo-doo brain and miscalculated the amount of supplies we needed so we could not finish that part today).  In each of the beds there will be a layer of gravel, then sand, then pine straw (for now, this is more a space filler and will compact overtime as it breaks down), then the compost we have been saving along with a lot of garden soil.  Where the chain link fence is now that currently separates our yard from my neighbor’s is already a privacy fence that Keith built today to help keep the monster hedge on their side of the fence.

Did I mention my oldest daughter designed this?  She is 8.  I told you she caught the bug.

At the end of the pathway is going to be a water barrel on a platform with a space underneath the platform for storing gardening tools and supplies.  Because a convenient garden is a successful garden. 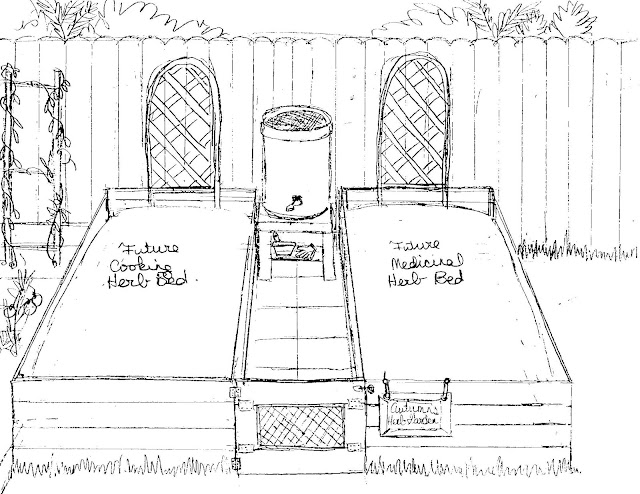 That was another problem we had that we had to overcome and it was more self-inflicted than anything else.  When we first started doing all of this, we did not take into consideration how easy or difficult it would be to maintain what we started.  It took a lot of hair pulling and redoing for us to understand that a well thought out plan that is centered on convenience is EVERYTHING when it comes to homesteading, particularly when you are working with limited space that you are trying to maximize.  Plus, let’s get real.  Getting it done right the first time is also cheaper.  The more simple it is, the more likely it is to get done.  The more likely things are to get done, the greater of a success you will be.  Consider all angles when planning something new.  And if you don’t know what those angles are yet…  well, we just jumped in head first and kind of hacked our way through it.  I would suggest talking to somebody that knows or has experience with whatever matter it is that you are thinking about undertaking, but I can’t honestly say that is how we started out.  It was a lot of trial and error for us. There were a few projects we had to set down and walk away before we started duking it out...  if you know what I mean.

When the herb garden if OFFICIALLY finished, I will post pictures up here on what it looks like.  For now you can see the disaster area…  I mean, current site.  Why do things always have to get messier before they can get better? 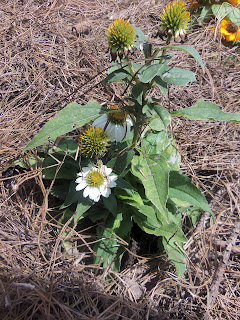 On a side note…  We recently planted a bed of purple and white coneflowers around our blueberry shrubs, which will be a temporary space for them.  For now, we just needed something else in the bed to take up some space.  The blueberry shrubs will be 6 feet in diameter in a few years and potentially ten feet tall, but for now they are still kind of small, and that poor bed looked empty.  Coneflowers need a very alkaline soil to flourish, and the blueberries need an acidic soil to flourish…  so, I am not expecting top notch coneflowers, although I am hoping that since they are uphill slightly and nicely spaced out from the blueberries, they will still do okay.  Plus, coneflowers are a perennial and will return every year.  Their root systems do very well, and it is not difficult to uproot one to put it someplace new- which will keep spreading. 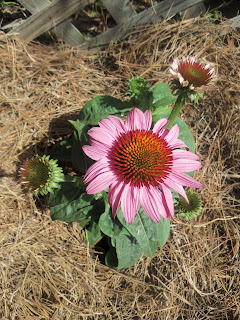 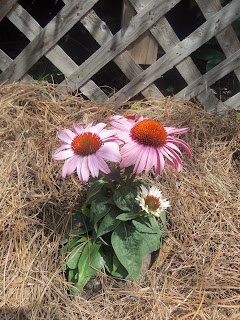 Coneflowers (aka Echinacea purpurea) is also a natural antibiotic.  When taken properly it is actually quite effective!  It also makes good tea, although I would suggest adding a bit of honey or Stevia.  Great for cold season!

These others are rudbeckia that we planted in the same bed and they are beautiful in the fall.  They also look great with the echinacea! 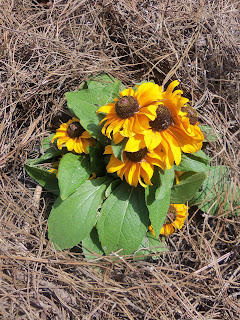 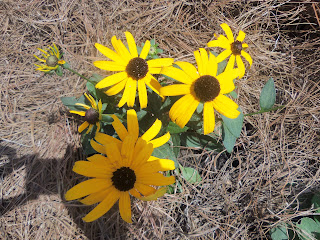 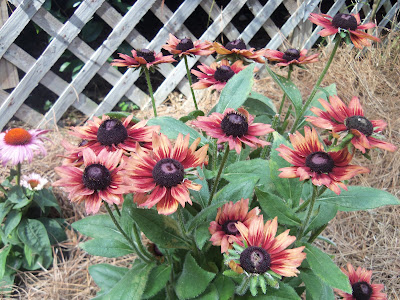 Posted by Rebecca Whiting at 15:43