About a year ago, I said “I could make vanilla extract.”  So, I did.  It’s very easy, although start up can be slightly expensive (think long term), but it is not something that will go bad (that I know of). 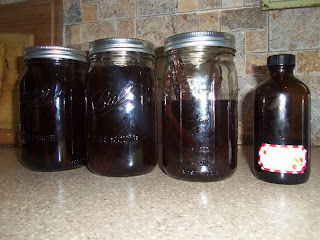 Find some vanilla beans.  I have found that the best beans are Madagascar Vanilla Beans.  You can find them from MySpiceSage.com  The price will vary some depending on the market.  The fresher the beans, the more of a crystallized look they will have.  Once they have lost that look, they have also lost their freshness.

Use 8 beans per quart of alcohol.  Yes, I said alcohol.  We used Vodka and Bourbon in ours.  The beans you put into Bourbon will retain enough of the Bourbon smell that you will definitely be able to tell that it is Bourbon even after it is ready to use.  However, some people like that, but once it is used for cooking or baking the Bourbon smell disappears as the alcohol cooks off.  The Vodka, I have found, has less of a strong scent.  Really, whatever kind of liquor you use, it just depends on your preference. 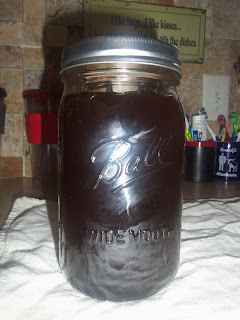 Cut each of the 8 beans down the center long ways with a very sharp knife.  Don’t go all the way through, but just enough to open them up.  After each bean is cut, put them into a quart sized mason jar and pour your liquor of choice over the top.  Put the lid on, and place in a cool dark place for the next six months.  You will start to notice a difference in color (only if your liquor was not brown to begin with) after a very short time period.  Within several weeks, it will be okay to use, but it will be at its best within six months.  About every week or so, make it a point to pick the jar up and shake it.  I tried to just do it and make it a habit every time I got into the pantry…  which was where they sat for the six months.

Afterwards, I found a 4 ounce amber glass bottle and poured some into that to put in my baking cupboard to make it more convenient to use.  Leave the vanilla beans in the jar for the duration of the extract until it is all gone.  I have read that you can re-use the beans and make more later…  which I intend on trying.  However, I made 3/4 of a gallon my first go around with this and I am not sure I will be running out any time soon!

See!  That was easy!

By the way, this makes AWESOME gifts for people around the holidays.
Posted by Rebecca Whiting at 16:22