Companion planting and soil testing and composting…  oh my!

The next steps for the fall garden all need to take place at the same time along with the final planning.

First thing, graph out your garden.
Get some graph paper and draw the garden out to the dimensions you have decided on.  This is what our garden looks like- 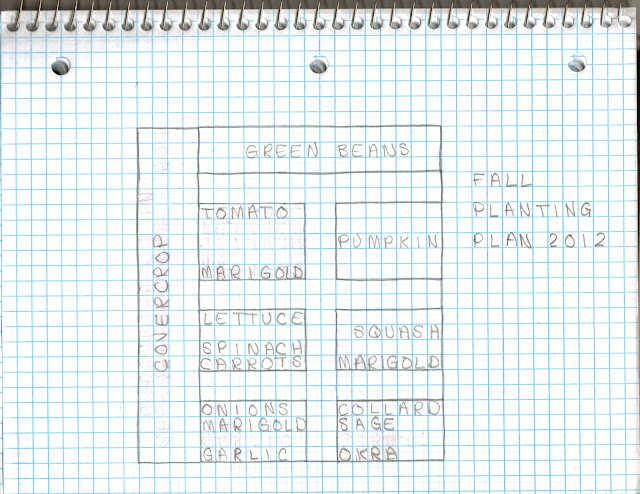 Draw out the dimensions and make a list to the side of what you want to grow.  Research the kind of space, light, and water that the plants need to do well.  Things that will grow bigger and taller should probably be put in the back.  Things that are going to stay short, should probably stay in the front.

I have a Farmers’ Almanac that has a companion planting chart inside of it that I use.  It’s got all kinds of dirt smudges now, but you can also find similar charts on the internet…  which I just happen to have already and can be found here.  Take your graphed out garden and put some thought into what is going to go where. 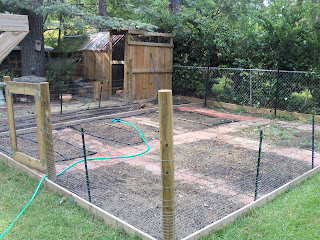 Second thing, start getting your plot ready.  Pull up the sod, break up the dirt (the PC word here is technically soil, but I have never been PC), add some amendments.  What does dirt need?  Every state will have an extension office in the agricultural department.  For South Carolina, the extension office is through Clemson University.  The extension offices do soil testing.   I would highly suggest getting your soil tested to figure out what exactly your soil needs.  It costs $6 per sample, but if this is what helps you get a successful garden, then you will make back that cost very quickly.  The test can be dropped off at any extension office.  To get a good sample, dig down about six inches and take about 2 cups worth of dirt and put it in a bag.  Don't take the dirt from the top, but the dirt six inches deep. 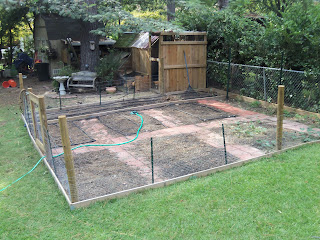 The test will give you a pH balance, nutrient balance, and a few other pieces of information.  Soil in South Carolina tends to be a little on the acidic side because of all the rain (that we usually get, except for this year).  It is a good idea to apply lime to your soil, but the best time to do it is probably about December.  Trying to make soil less acidic is a long process as it is not water soluble and will only move one inch down a year.  There will be more on this later.  Probably a whole other blogs worth of information can just come from that.  However, what you do need to know and understand, is that soil that is more acidic will not grow vegetables as well as they could grow…  which is why it is so important.  They will still grow.  Just not as well.

The whole soil thing is a balancing act.  The composition of your dirt is very important.  Most of the middle South Carolina area is either sand or clay, but not much in between.  For dirt to be GOOD dirt, it needs to be in between.  Clay holds in too much water, sand doesn’t hold water at all.  Clay makes the ground too impacted, and sand makes it too loose.  This is the exact reason why I chose raised beds.  We brought in top soil from the bags, and gardening soil.  Then we also added to our dirt all our compost, decaying pine needs, rotting veggies, and rabbit poop.  I also added bone meal and blood meal (you can find those at any gardening store or section and are great organic options).  But adding in good dirt with plenty of nutrients gives your plants a better fighting chance.  Break out a shovel and really dig down, too, to break up the compaction.  Some sand is good for your dirt, but if you hit a big chunk of clay…  throw it out.  Mix it all together.

A great way of telling if the composition of your dirt/soil is good is by using the feel method.  Get a clump of dirt in your hand and squeeze it.  If it sticks completely…  it’s got too much clay.  If it just calls apart with no resistance, it has too much sand.  If it kind of sticks, but kind of crumbles…  you are on your way to loamy soil.  And that is what you want.  Loam.  Loam is a kind of dirt that has enough organic matter to make it ideal for your veggies.   It also has a nice dark brown/black color.  Fertile soil looks good.  I was also going to say that it smells good, but I didn’t want to give anyone the wrong impression.

Your dirt is also in need of nutrients.  Ever noticed on fertilizer bags why they have those three numbers that sometimes looks like this- 10-10-10 or 9-7-10 or 15-25-10…  Those numbers are the level of nitrogen, phosphorus, and potassium that are found in that fertilizer.  For soil to be effective, there is a level of nutrients that it needs to have.

A soil test will tell you what your level of each of these is and what needs to be added, but in my opinion it does not hurt to add extra blood meal to the dirt a week or two before you plant.  The plants always seem to be lacking in nitrogen.

Why is nitrogen important?  A lack of nitrogen will limit plant growth and plants use a lot of nitrogen.  Blood meal is a good nitrogen supplement.  Also, rabbit manure is VERY high in nitrogen and phosphorus.  Plus, a lot of manures have to be composted before going into the garden…  not rabbit poop!  Just throw it on!

By the way, we have A LOT of rabbit poop.  If you live in this area…  please come and get some before you plant.  I hate to throw it out because it is good stuff…  but we have a lot of bunnies.

Which brings me to the third thing…  Composting.

Don’t waste your scraps from the dinner table any longer!  Find a nice place in the backyard away from where the kids play, but accessible enough that it is convenient to get to it.  Whether you start out with a hole or a fancy set up, start taking uneaten fruits, veggies, breads, paper napkins, coffee grounds (and the liner), grass clipping (GREAT source of nitrogen!!!), pine needles, etc…  and toss them in a pile.  Add dirt every so often to layer it, then turn it with a pitch fork or shovel or something.  To make humus (the point at which compost will break down no further), a steady exposure to air and water needs to happen.  When it becomes humus…  add it to the dirt with all the good nutrients that it will bring with it.  Plus, this will greatly limit the garbage that you throw out and put on the curb once a week!  Bonus!  If you have any questions, you can google it and there are TONS and TONS of composting informative articles.

So before you plant, make your final plan taking into consideration what can and cannot be planted together.  Fix your dirt and consider getting a soil sample.  Then start a compost for future use.

Part 3 is going to be about the actual planting, mulching, watering, and cover crops.  So stay tuned!

If you missed Part 1, you can find that here.

Or contact us by Email!
Posted by Rebecca Whiting at 13:53