Apparently, we are having an unusually long winter, even for Minnesota standards right now.  When you hear the meteorologist on the radio say the ten day forecast with a sigh of exasperation…  you know it is serious and even the weather man is feeling the strain.
I. AM. SO. TIRED. OF. SNOW.
In fact, it is mid April now…  and we are in the middle of ANOTHER snow storm.  I was hoping to be putting in fencing by now.  Clearing out Poplar sprouts by now.  Building a barn maybe.  At least started.  I have to admit…  I started feeling a little doubtful of my ability to handle Minnesota winters.  Southern girls need sunshine.  Southern girls need to be able to feel the dirt in between their toes.  A southern FARM girl needs even more sunshine than the recommended level and on a regular basis.  When was the last time I walked outside barefoot??!!  And all this wintery exposure starts forcing you to start asking yourself the more obscure questions like “How do Eskimos do this?!”


After it started snowing AGAIN this afternoon, I told Keith “You never told me that it would still be snowing in April.  You have to explain these kinds of things to a southern girl.  It never occurred to me that we would still be dealing with this.”  To which he replied “This northern boy didn’t think that he would have to explain something like that.”  There are still vast cultural differences that we are trying to work through…   It would be easier if Mother Nature wasn’t so hormonal.
In the meantime, although the weather is a significant hold up, my access to the internet is still helping things move along.  I’ve spent more hours than I care to admit up to my elbows in USDA sorting through law, regulation, grant funds, and what not.  I’ve talked to everybody I can think of so far to glean knowledge, understanding, and wisdom in areas from dairy farming to bread making to orchard growing, pasture clearing, barn building, goat raising, sheep shearing, egg liscensing, market participating, and soil analyzing…  it’s a lot.  And yet, I don’t feel the slightest bit intimidated.


We have purchased our first pullets.  We have 38 or so due to come in next week.  Ten Barred Plymouth Rocks, ten Buff Opringtons, ten Rhode Island Reds, a rooster for each of the breeds, and then five Silver Laced Wyandottes that was bought more on impulse than intention.  Then to top it all off, we may have impulsively purchased four various types of Bantams, two Polish chicks, and six ducks due to a bad day.  We made it better with poultry.  Because…  that’s just how we roll.  Once we get “moved in” our flock will increase significantly, but I needed something squeaky to hold me over…  I think Keith knew that and so one day came home and said “Why don’t you place an order for chicks.”  I didn’t argue.
I did buy everything we needed to make a few pullet cages.  It’s a start.  We had to leave our pullet cages behind in South Carolina when we left.  Right now, our garage is the staging area for all this farm stuff, and then when it is time to deploy it to the new place we will just move it on over.


We also purchased seven more goats!  We have our two still, then we bought three more from the farm they are staying at (two does and a buckling), and four more doelings from another farm here in Minnesota.
We also found and purchased three Great Pyrenees dogs: two females and a male that will keep watch over our herd of goats and sheep.  I am really, really looking forward at picking up our dogs! 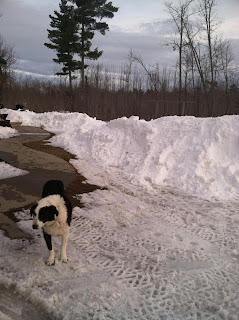 We've also been barn shopping!  And guess what?  Barns are really expensive!  Looks like we are building it ourselves!  So, we've drawn out a plan on graph paper, put together a materials list with prices, and are just waiting for the ground to thaw.  Or the snow to melt.  Can the ground thaw before the snow melts?  I will have to ask around.

I think it is going to be awesome, even if we have to build it ourselves.  Yeah, it's a lot of work...  but the end result will be nice.  And if we build it ourselves, we get to put in it what we want.  Can't go wrong with that.  Break out the Motrin, boys!  We are havin' an olde fasioned barn raisin'!
Really, at this point in time, I am forced to remain in the dreaming stage until the reality stage becomes…  well, more of a reality after this snow starts melting.  I am trying really hard not to get discouraged by the lack of weather cooperation, but dang…  who would have thought that this would be the biggest hold up?  I didn’t!